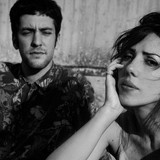 Thrust together by fate in 2015, Italian singer/songwriters Federica Caiozzo and Giampaolo Speziale turned their romantic union into something more musical, forming the lo-fi alternative duo Malihini. Echoing the sounds of acts like the xx, Charlotte Gainsbourg, and José González, they issued their debut EP, Lose Everything, in 2017, tightening their delivery by the time they released their first album, Hopefully, Again, in early 2019. Prior to Malihini, the duo were individual performers. While Rome-native Speziale was involved with acting and film composing, Sicilian-Polish Caiozzo performed as Thony, starring in films such as Tutti i santi giorni (2012) and recording solo efforts With the Green in My Mouth (2010) and Birds (2012). When they met in 2015, Caiozzo was hitchhiking; Speziale picked her up. Months later, they reconnected at a concert and kicked off a whirlwind romance that ultimately led to a newly formed musical project. Dubbing it Malihini (the Hawaiian word for "newcomers"), Caiozzo and Speziale crafted their earliest songs while on a road trip through Italy, Germany, and Poland. Signing with Memphis Industries in 2016, they issued their first single, the quirky psych-pop "Waiting." From there, they released additional tracks that wound up on their debut EP, Lose Everything, which arrived in September 2017. Recruiting producer Richard Formby (Wild Beasts, Ghostpoet) and drummer Alberto Paone, Caiozzo and Speziale got to work on their first full-length. Hopefully, Again was a sensual and gauzy affair that showcased the pair's tightened songwriting and multi-instrumentalist talents on tracks such as "Delusional Boy" and "A House on a Boat." ~ Neil Z. Yeung