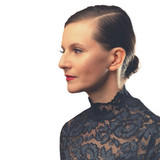 Halstead’s fifth album, set to be released in early 2021, ‘Disposable Love’ showcases her versatility. Her work with producer Dave Brophy- whom she describes as her “musical soul brother”- has sent her sound on a bigger and pop driven trajectory. The songs hold up a mirror to our current societal challenges, reflecting some of the biggest issues we are facing: artificial intelligence, climate change and rapid technological advancement in a post moral world. The title track rocks with a tremolo surf guitar sound as her vocals lament the throw-away society we are steeped in and the addiction to meaningless “likes” in the age of social media.

“I want to write and create art around the things are plaguing our subconscious and conscious minds. I’m approaching [songwriting] now from an onus of responsibility.” As Jed Gottlieb from The Boston Herald writes, “Halstead’s original material feels like sorceress music, holy music, but for druids and faerie folk with an aesthetic both heavenly and earthly.” In a sea of songwriters, Jenee Halstead stands out. Not just because of her dreamlike and alluring voice, but because she writes about meaningful and relatable subjects, while keeping her music accessible and honest.