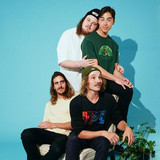 Having emerged in 2021 as one of Australia’s new favourite acts – thanks in large part to their ARIA top 10, triple j Feature album – Gardens – Perth rock outfit Sly Withers today announce that their huge year isn’t even close to being over, with news of a deluxe edition of Gardens set for release November 19 – the first two songs from which can be heard today. Recorded in the aftermath of the success of Gardens’ release in July this year, Gardens (Deluxe Edition) features two new originals, including the single out today, ‘Selfish’; a collection of acoustic and piano covers of songs from Gardens; their brilliant early 2020 single ‘Explode Into View’; and (FINALLY YES!) a recorded version of their spectacular triple j Like A Version cover of Coldplay’s ‘The Scientist’.