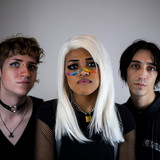 Bridging post-Hardcore sensibilities and emo aesthetics, GILT have made a name for themselves since 2017. Navigating topics of gender dysphoria, body dysmorphia, and mental health in their music, the band is now three EPs, one album, and multiple national tours into their career. GILT have since extensively toured North America through multi-month self-booked runs, as well as having played The Fest several times. Aside from their touring schedules, GILT is known for their advocacy for marginalized groups, and hosting their own annual charity festival "Snipfest", with 2021's streaming edition raising several thousand dollars towards gender-affirming name changes for LGBTQ+ folks across the country. The band has now set sights on releasing an EP in November 2021 (via Knifepunch Records [US] / Hunkofplastic Records [UK]). GILT will tour in the US this Winter. GILT is: Ash Stixx (they/she/he) Tyler Fieldhouse (they/them) Tilley Komorny (she/her)