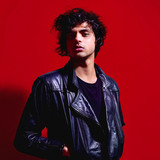 Harts is the nom de plume of Indian-born, Australian-based musician, singer/songwriter, multi-instrumentalist, composer, and music producer Darren Hart. Over his career Harts has cemented himself as one of Australia's leading music talents, building an impressive resume of critically acclaimed work as both a solo artist and a sideman - working alongside international icons such as Prince, Lenny Kravitz, ?uestlove, Denzel Curry, Joey Bada$$, as well as Australian legends like John Foreman, Marcia Hines, Peking Duk and more... In recent months, Harts was chosen to headline the ICC T20 Cricket World Cup Opening Ceremony, in which he had been hand-picked to record and produce the official campaign theme song. In 2021, he performed live on Channel 10's NYE Gala, as well as at the MCG for the Big Bash League Cricket. With 3 full length albums, 2 EPs, and a multitude of festival and TV appearances both locally and internationally, Harts has worked hard to achieve what few do, all the while inspiring a new generation of multi-instrumentalists, guitarists and bedroom-producers. 'This Way I'm Seeing' is the new single from Harts and is the first taste of more new music to come in 2021.