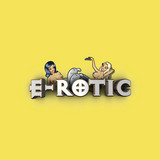 E-rotic is a very successful dance project founded in 1994 by the German producers David Brandes & Felix Gauder. In particular, in the late 90’s, E-Rotic had smash hits like "Max don’t have sex with your ex“, “Fred come to bed“, “Sex on the phone“, “Help me Dr. Dick“ etc. The project has sold more than 10 million records worldwide & their songs can be found & heard on more than 200 million compilations. Even today, the project enjoys a massive fan base Worldwide. During the last 25 years, it was fronted by several singers including Lyane Leigh, who later rejoined the project in 2016. Other singers who were involved in E-rotic’s success, were Raz-Ma-Taz, Jeanette Christensen, Terence D'arby, Ché Jouaner & Lydia Madajewski.