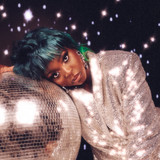 Nigeria born, New York City bred Kah-Lo has carved her own niche with sonic versatility. Kah-Lo first emerged on the scene collaborating with UK producer Riton on the hip-house cut “Rinse & Repeat,” which earned the two a Grammy nomination. From there, Kah-Lo dropped her solo debut single “Fasta”, sitting at the crown of the BBC Radio 1 Dance charts for five weeks. Kah-Lo's infectious “Fake I.D.” became the lead song for the U.S. arrival of TikTok, and the viral hits have just kept on coming. Kah-Lo’s songs have been featured in a myriad of placements on TV, film, and and gaming placements for her songs, including “Exit Sign” on the FIFA 21 Volta soundtrack. It’s been a non-stop ride since she first got started, punctuated with hundreds of millions of streams and global appeal. Whether it’s collaborating with Idris Elba on “Ballie” or Selena Gomez on the “Back To You Remix,” Kah-Lo shines. Her features on Diplo’s “Give Dem,” along with The Knocks on “Awa Ni” have also further crystallized Kah-Lo’s consistent track record for bringing the best out of any song she touches. In 2020, she dropped the rhythmic “Melanin” with Michael Brun, setting the stage for 2021’s “arrival.” On her debut EP "The Arrival", Kah-Lo brings a culmination of all of her sounds as a soundtrack for your most confident moments!