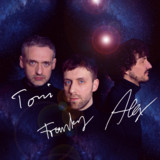 An ode to trial-and-error, to DIY and to friendship, an obelisk made of all the bits and trinkets found along the way. Bodi Bill are a band that works within contexts: With their art school background and a fertile home soil they are pioneers of a modern musical eclecticism of techno, folk and indie. With their various EPs and albums "No More Wars", "Next Time" and "What?" Bodi Bill make themselves indispensable and grew into the hearts of their listeners, making them burst again and again in sweaty live shows. Straight from their circle of friends in their home town Berlin they passionately slogged it out throughout Europe since 2007. Since 2012 Fabian Fenk, Anton Feist and Alex Stolze primarily turn towards other activities, play solo and in equally exciting projects like The/Das, Unmap, Romano and Everything and Everybody. Meanwhile Bodi Bill then as now is about ideas and creative processes as a form of communication, not isolation. It's about mindfulness, exchange and interaction. The music confronts you in a civilized way, as disturbing as stimulative, constantly changing form and function. It offers its services, but still it rather poses new questions than giving answers. And most of all: it's beautiful.