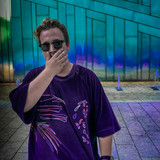 Alex, better known as Naulé has been making waves recently in today’s electronic music scene. Making it seem easy to chart in different countries, Naulé has entered just in 50 country’s iTunes Top 100 in 2020 leaving his mark on the #1 spot in 5 countries including his recent song Hide going number one in his home country, Hungary’s national TV and keeping him in the top 10 for more than 2 months. His music has reached millions around the globe, while he constantly keeps bettering himself over and over again. Packing massive radio support from the biggest stations including SLAM FM and Radio 538 with the support of Top 100 DJs such as Lucas & Steve, Mike Williams. With over 4.000.000 streams on Spotify, Naulé is set to rise and rise proving his latest release Meant to Be

has skyrocketed to 100.000 streams in less than a month. Alex feels like helping the World is key to his happiness so he’s constantly on the lookout for supporting amazing causes like ocean cleaning or the fight against deforestation.   Management/Bookings: zsolt@avantagemanagement.com