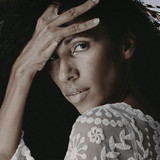 Bê Ignacio was born and raised as the daughter of an Afro-Brazilian father and a German mother in Sao Paulo, Brazil. Luiz Brasil, her producer and mentor and one of Brazil’s best guitar player and arranger who worked as musical director with such artists like Caetano Veloso, Gilberto Gil, Cassia Eller, started to work with Be producing her first album with Musica Popular do Brasil, Jazz and Bossa Nova. Now, 10 years later, after graduating from the Jazz Department of state music academy in Stuttgart and releasing 5 albums, Be Ignacio and Luiz Brasil re-encountered at the famous Bossa Nova Club „Beco das Garrafas“ in Rio and decided to work together again. Different from her former rather Pop-influenced albums, on „Bossareggae“ she is creating a new sound, influenced by the music of her religion Candomblé, her idols Djavan, Bob Marley, Tom Jobim and Ellis Regina, that would mix Bossa Nova, traditional Brazilian Reggae-similar rhythms like Xote, Ijejá and Forró in a much more intimate and acoustic vibe, different from other styles like Bossa Nova Lounge Music or Reggaetone. Bê Ignacio has been constantly expanding her radius of touring from Europe

around the World since 2008 and, undoubtedly, has become a true world music artist, with her natural and straight singing, and the semi-acoustic show with her more intimate line-up with guitars, samples, percussion and drums. 2019 will mark a return to her Brazilian roots with a new album called „Bossareggae“