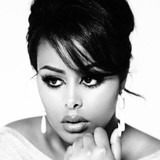 The somali-swedish RnB-Queen. Cherrie debuted with the song “Intro” released in 2014 and followed up with the acclaimed hit “Tabanja”, nominated for “Video of the Year” and Cherrie for “New Artist of the Year” at the Swedish Grammy Awards 2016. In April 2016, she released her debut album “Sherihan” and won amongst other prizes “Hiphop & RnB of the Year” at the Swedish Grammy awards, P3 Gold, Manifestgalan 2017.   On the song “Aldrig Igen (må sådär)”, Cherrie made a noticeable collaboration with @Stormzy, a collaboration that led her to support Stormzy & Lethal Bizzle on the European Merky tour in the spring of 2017. During the summer, Cherrie was one of the talkers for ”Sommar i P1” a legendary swedish radioshow as well as releasing her Documentary ”Ut ur mörkret” on swedish national tv.   Cherrie was handpicked to 30 Days in LA and 30 Days in Chicago, with talents from all over the world. During her month in the states, she adorned billboards around Los Angeles and opened for Jhené Aiko in front of a sold-out Avalon. In Chicago, she made a prestigious appearance when she performed the same night as Daniel Caesar & SiR.   In autumn 2017, Cherrie released the song “163 för evigt” featuring Z.E, which became a viral success picked up by radio in Britain and Canada, for example. In just a week, the video received a million views on Youtube and then @Kehlani featured the remix.  With new album “Araweelo” being the soundtrack for the summer of 2018, 2019 lies at Cherries feet.