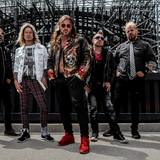 Since the beginning, Fozzy has been about hard work, dedication and delivering great rock n roll to their devoted fans worldwide; reminding them that music is all about invoking dirty, sweaty, jubilation and doing it LOUDLY! However, calling them just “entertainers” would be abridging their talent, as Ward is one of the most versatile riffers in rock n roll and Jericho’s vocal range and passion for music makes him a worthy partner for The Duke. Throw in the powerhouse rock solid drumming of Frank Fontsere, the blazing leads of Billy Grey and youthful virtuosity of Randy Drake and it's no surprise that Fozzy has skyrocketed into becoming one of the hottest rock acts in years. But as much success the band had enjoyed, nothing compared to the juggernaut known as "JUDAS". Released in May 2017, the song spent 6 WEEKS at NUMBER ONE on the highly influential 'Big Uns Countdown' on Sirius/XM's Octane channel, amassed over 40 MILLION views for it's video on YouTube and cracked the TOP 5 on the US Rock Radio Charts. With that giant hit in their arsenal, Fozzy continued their winning partnership with songwriter & producer Johnny Andrews by entering the TOP 10 twice more with “Painless” & “Nowhere To Run”, as well as gaining another TOP 20 with “Burn Me Out.”

The band then embarked on their wildly successful Judas Rising Tour.