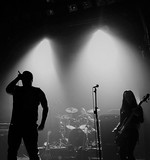 Formed in London, Ventenner is an alternative rock hybrid blending metal, atmospheric electronics and doomy riffs. Although starting as a solo project in the industrial scene, Ventenner has grown and evolved to occupy a genre all of its own.   Their debut album 'This Is The Reason' was released in 2012. A blend of industrial rock and electronica, it paved the way for Ventenner's entry into the London scene, gaining a following and opening for industrial bands from around the world. 2014's 'Distorture' showed Ventenner exploring a much darker sound. A sprawling, immersive and much darker album, it was the foot in the door to the industry that Ventenner aimed for, landing larger shows, label interest and raising their profile in the scene.   'Invidia', released in 2017, presented a much heavier and more visceral guitar focussed sound, influenced by their time spent on the live scene and touring. 'Invidia' was critically acclaimed across the board, but followed up almost immediately with their 2018 release of a B-sides compilation 'Fragments'.   Their fourth studio album 'Hollow Storm' again pushed them even further into their own realm, fusing metal, alternative, grunge and doom, all underpinned with atmospheric electronics and textures. Showcasing a more restrained sound and a vastly different structural approach to song writing.   The latest line up and sound is Ventenner’s strongest so far, showcased on the latest EP ‘Parasight’.