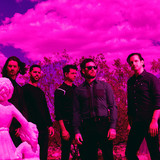 On a very simple level, Hell Is In Your Head is a record about death. Yet Senses Fail’s eighth studio album is also much more complex than that. Divided into two halves – one set in the fictional world of TS Eliot’s epic 1922 poem “The Waste Land”, one in the more contemporary dystopia of today – it was co-produced by Saosin’s Beau Burchell, and is the first Senses Fail album that sees

Buddy Nielsen, the band’s only surviving member, become the band’s sole creative force. The result is a dark, brooding record that Nielsen considers a musical and thematic counterpart to 2006’s second full-length, Still Searching, and which sees him embark on a philosophical and existential journey into not just death itself, but what it means to die. “This record attempts to go to the dark place of ‘What is it that we’re so afraid of death?’” he explains. “We’re afraid of death because of grief. Are we truly afraid of death because of death? Through my own therapy, I’ve learned you don’t even really have a clear understanding of death because it’s unknowable. And since you literally can’t die and come back, I tried to place the record in a much darker fictional place to help talk about those unanswerable questions.”