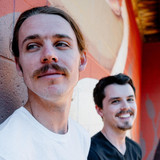 Party of the Sun

Featuring Party of the Sun

Party of the Sun is a psychedelic folk band from New Hampshire, comprised of Ethan McBrien, Rory Hurley, and Garrett Cameron. Writing and recording in various nature-bound locations, such as a small New England sheep farm, the band has released two EPs and two full-length albums over the span of just a few years. With coverage including Atwood Magazine, Glide, UNXIGNED, and alexrainbirdMusic, Party of the Sun’s music has been described as heartfelt, warm, and meditative. Exploring themes of connectedness, time, nature, and fatherhood, Party of the Sun crafts timeless folk with nods to psychedelia and Americana. Party of the Sun has been featured in television shows such as Deputy on Fox and Charmed on The CW. They have shared the stage with acts including William Tyler, Robert Randolph & The Family Band, Footings, The Weight Band, and more.