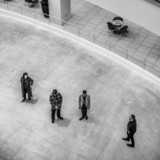 One of the bands defining the sound of 2010s post-punk, Portland's Soft Kill began as standard-bearers before taking their music to anthemic heights. Grounded by the cavernous vocals and cathartic lyrics of Tobias Sinclair, over the years the band moved from the raw intimacy of 2011's An Open Door, which updated the sounds of post-punk legends like the Chameleons, the Sound, and Joy Division, to 2018's Savior, which set songs about real-life hardships to widescreen sounds inspired by U2, Tom Petty, and the Replacements. Soft Kill formed in San Diego in 2010 as an extension of Sinclair's previous project, the gothy, lo-fi one-man band Blessure Grave. At the time, Sinclair was writing songs for Blessure Grave's second album, but their more polished, post-punk approach made him realize this was the beginning of a new group. Soft Kill's early lineup also included Shiloe Alia, Justin Gradin, and Mattey Hunter. This version of the band recorded 2011's well-received debut album, An Open Door, which was released by Nathan Howdeshell of the Gossip's Fast Weapons label. Following An Open Door's release, Sinclair put Soft Kill on hold for a time while he dealt with some health issues. However, he continued to record demos -- which were gathered in the 2013 collection Circle of Trees -- and the band re-emerged in Portland in 2014. This incarnation of Soft Kill featured guitarist Conrad Vollmer, a longtime friend Sinclair met in the early 2000s; keyboardist/bassist Owen Glendower; and drummer Maximillion Avila, who also played with Antioch Arrow, Atriarch, and Chromatics. The band's second album, 2015's Heresy, consisted mainly of Sinclair's songs but also featured a few collaborative tracks, an approach Soft Kill expanded on with the following year's Choke. The band's debut for the largely metal-focused label Profound Lore, Choke was mixed by Uniform's Ben Greenberg and boasted wide-ranging influences as well as a collaboration with the Chameleons' Mark Burgess. In October 2017, Soft Kill paid tribute to Tom Petty shortly after his death by covering his 1981 song "Insider." Petty's influence also made itself known on the band's cathartic fourth album, Savior. A set of songs written when Sinclair's wife nearly died giving birth and their baby son spent weeks in an intensive care unit, the album also drew on the sounds of U2 and the Replacements and introduced drummer Adam Bulgasem. Recorded at Los Angeles' Kingsize Studios with Greenberg producing, Savior was released in May 2018. ~ Heather Phares, Rovi