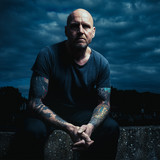 Paul Davis is a name that might not readily trip off the tongue these days but dial back 15 years and his Circulation project (alongside erstwhile partner Matt Jackson) was a hugely successful electronic act that toured the world and was responsible for an iconic series of colour-related dancefloor bangers, from Green right through to Opal, their final act as a duo, in 2005. In their pomp, they were one of the UK’s cutting-edge house acts whose music fuelled the dance-floors at clubs like Fabric (where they frequently played in its early days). They toured globally as DJs and a live act. They played the first ever Creamfields in Argentina. They played so many times in Israel, they lost count. The opened for Carl Cox at Sónar in Barcelona. Davis feels like his mojo has finally returned as he gingerly takes baby steps back into the musical life he once abandoned. His first release for 15 years came out last October via Argentinian label Electronic Groove under the name Paul Davis aka Circulation. He’s now simplified his moniker down to Circulation. Already working on vocal tracks with various singers (among them Ricky Bar-row, formerly of The Aloof), his music has noticeably matured from his days as part of the original duo; the sound is less impulsive, the tracks drawn out (almost languid) but without removing their foot from the dancefloor power. He may well have been away awhile but expect to hear much more of Davis over the coming year: now fully back in Circulation.