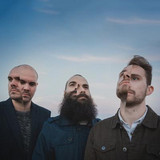 London-based power trio Arcane Roots blended incredibly technical, progressive metal with big, bombastic pop hooks, gradually building their stock to become one of the U.K.'s favorite underground rock bands and a compelling live draw. The band formed in 2006 after guitarist/vocalist Andrew Groves and drummer Daryl Atkins met while studying music technology together at Reigate College in Surrey. Recruiting bassist Frank Tiramani, they recorded a number of home demos, leading to their self-released 2008 debut EP Brave the Sea, tracked at the same studio where Reuben had laid down their debut. An eponymous second EP arrived the following year, and a third, Left Fire, was released in 2010, by which point Tiramani had left the band to be replaced by Adam Burton. The EPs, and the band's explosive live performances, were well-received by the press, drawing comparisons with Biffy Clyro, Muse, and At the Drive-In, securing them a management deal. In 2012, Arcane Roots played their biggest show to date at the Greenbelt Festival. That year, they signed to PIAS, which re-released Left Fire, and put out their debut full-length album, Blood & Chemistry the following year. The album went to number seven on the U.K. rock chart; the band played the Download Festival, and toured with their heroes Muse and Biffy Clyro. In 2015, Atkins left, replaced by Jack Wrench. That year the band left PIAS and signed with Easy Life for the release of their fourth EP, Heaven & Earth. Arcane Roots spent much of 2016 holed up in the studio working on their sophomore full-length. When its first single "Curtains" emerged late that year, it revealed a new direction for the band, tempering their traditional fire with a more electronica-influenced sound redolent of Radiohead's Kid A period. Two further singles followed before the band's second album, Melancholia Hymns, appeared in mid-2017, also through Easy Life. ~ John D. Buchanan, Rovi