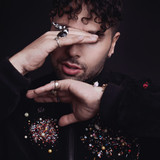 XOV is a Swedish-Iranian artist and music producer known for his signature dark-pop sound, blending elements of modern hip-hop/RnB and soul with 90's lyrical melodies and 80s synthesizers. Critics describe him as "the lovechild of James Blake and The Weeknd", "the male version of Billie Eilish", and "resoundingly confident, and over the top". XOV gained international recognition in 2015 following his collaboration with Lorde on the Hunger Games: Mockingjay Soundtrack. His music has been streamed over 100 million times with hit singles "Boys Don't Cry" and "Lucifer" certifying Gold / Platinum in several European countries. He's performed at festivals such as Reeperbahn Festival in Germany, By:Larm in Norway and Way Out West in Sweden. His breakout year ended with a spectacular performance at the Brandenburg Gate in Berlin on NYE 15/16 where he performed to an audience in the millions. In 2016, XOV took a 3-year hiatus from music to devote his time to humanitarian work, founding the compassion movement I AM YOU [Humanitarian Aid] while volunteering in what the BBC calls the "worst refugee camp in the world".

Today, XOV combines music with international philanthropy projects, serving as an advisor for Human Rights Watch, I AM YOU, and others. The fall of 2020 marks the beginning of a new XOV season packed with releases. XOV is currently in Stockholm, Sweden working on his sophomore album.