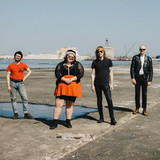 Coming on like a soulful yet unholy amalgam of the Mekons, Thin Lizzy, the Jackson 5, and the MC5, Pennsylvania's Sheer Mag distill big '70s riffs and garage punk attitude into a hook-filled, lo-fi dance party. The band formed in Philadelphia in 2014 around the talents of Kyle and Hart Seely, Matt Palmer, Ian Dykstra, and powerhouse vocalist Tina Halladay, and within a year started issuing a flurry of 7" releases that caught the attention of everyone from Stereogum and Pitchfork to Rolling Stone and NPR. In early 2016, Sheer Mag issued their Static Shock Records label debut LP, I/II, which collected all the tracks from their first two EPs. A year later, another edition of their singles compilation was issued, this time adding the four tracks featured on their aptly named third EP, III. The band had already begun work on their debut full-length, with Hart Seely at the controls. Featuring a more nuanced approach to their tinny AOR sound, and with Halladay's vocals even more front and center, Need to Feel Your Love was released in July 2017. The group got political and personal on their 2019 sophomore effort, A Distant Call, which looked to socialism, economic hardship, and the death of Halladay's father for inspiration. ~ James Christopher Monger, Rovi