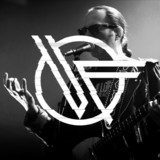 One day in 2015, a musician in Sweden had an idea. He wanted to form a new band. He wanted a band that would be unlike everything else in the contemporary swedish rock scene. He wanted a band that explores dark cosmic dystopias and misery in general, a band that starts in his head and grows freely from there. He is Rob Coffinshaker (The Coffinshakers, Gehennah) and the new band came to be Underground Fire. Rob recorded six songs in the summer of 2015 that eventually ended up on two singles and a compilation LP before the band finally settled with a full line-up consisting of Rob (vocals/guitar), guitarist Anders Karlsson (ex-Bay Laurel, Impression) bass player Robert Schlyter (ex-Haddock, ex-The Soulshake Express) and drummer Edvin Norrman (ex-Mama Kin). 2017 Underground Fire entered Studio Cobra in Stockholm with Martin “Konie” Ehrencrona behind the controls. The vision is finally starting to materialise for real in 2018, when the first songs from these sessions are released as digital singles; “Summer Ends” and “End of the Night”, the latter also accompanied by a promotional video that gets a lot of attention. Now the time has finally come to reveal the first full-length album, “Ashes of Life”, upon the world, and where this will lead we can only guess.