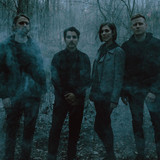 "Washington, D.C.’s Bound appeared to come out of nowhere in 2018 with No Beyond, an album so fully-realized that many observers noted it’s hard to believe it could be a debut. Deftly melding elements from shoegaze, post-rock, doom, goth and more into something greater than the sum of its parts, No Beyond seems to emerge from a mist. Their sophomore effort Haunts, on the other hand, seems to rise from the very ground. "Thematically, the album is an exploration of place. Sonically, its staggering beauty and surprising accessibility belie a dark heart and a constant inclination toward the off-kilter. "Presented as a series of vignettes in one unbroken, circular composition, the album tells deeply personal, often disquieting stories of places where formative life events occurred – and the pull that those places still exert. Further rooting the songs, each is marked with sounds of objects taken directly from its origin. “The album’s dense, baroque arrangements and aural easter eggs reward repeated listens. Somehow, amid layers of sound often so otherworldly, you can almost smell the dirt, taste the blood, and touch the pavement. "Bound’s approach to any genre element is undeniably singular. And Haunts represents the next step in the creation of their own distinct canvas, one that’s both boldly unique and remarkably approachable. Like the formative places and ghosts of the past that built these songs, it will stay with you long after it’s over." — David Zeidler