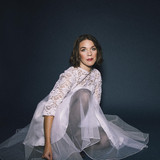 She is one of Sweden’s foremost jazz singers, with a unique ability to enthrall an audience. Isabella Lundgren debuted in 2012 with the album It Had to Be You, and she has since then received numerous awards, scholarships and been nominated for a Swedish Grammy, twice. As a Swedish music journalist once said: “If the 20th century belonged to Monica Zetterlund, the 21th century belongs to Isabella Lundgren ". 2014 she released Somehow life got in the way, it was named one of the 100 most influential albums in Swedish jazz history. In 2016 Where is home, containing her original songs was released and also Grammy nominated. The Swedish Daily news then called her “one of the greatest things to ever happen to the Swedish jazz scene”. Isabella Lundgren has a great love for the American Songbook and American folk & blues tradition. This showed in Out of the Bell Jar, her 2019 album where she interpreted the works of Bob Dylan, and this year she continues on the theme with a bunch of timeless classics. Her new album, Look for the silver lining is out spring 2021 on Ladybird/NAXOS.