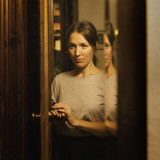 Featuring the voice and songwriting of Matilda Mård and influenced by early dream pop, Many Voices Speak took shape in the mid-2010s when Mård temporarily relocated from Stockholm to the less hectic Borlänge, Sweden. The indie project's first single, "Video Child," appeared in September 2016, a month before the arrival of the debut EP Away for All Time via Strangers Candy and Hit City USA. The EP's cover of Rodgers & Hart's "Blue Moon" created some buzz on the Internet and landed Many Voices Speak on Billboard's Emerging Artists chart. ~ Marcy Donelson, Rovi