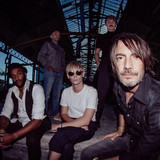 In the early 2000s, near the city of Lyon (France), 2 brothers BEnn (singer) and Victor (bass) and their closest friend SLip (visuals) wanted to create the ambitious project to make a music between Kraftwerk and The Beatles. The band released their 1st album “Home” in 2002 and found themselves selected at the Printemps de Bourges. Apple Jelly starts a tour playing through the biggest French festivals (Francofolies de La Rochelle, Musilac, les Nuits de Fourvière…). The 2 brothers are back with a 2nd opus called "Nanana Club" in 2008.

During the tour, Apple Jelly opened shows for bands like the Klaxons, Razorlight, Cassius, Franck Black, Just Jack… They also played shows in UK,, Switzerland, Malaysia, Thailand and the Czech Republic. In 2012, Victor left the group. BEnn and SLip are gradually laying the foundations for the 3rd album "Die, Motherfucker! Die !!! Which will finally be recorded in 2013 with Bruno Preynat (already present on "Nanana Club"). In April of the same year, the band released a 1st single called "Control" but kept the album aside. In the same time, they worked on a side project called OH BOY! and released the EP « The Fall » in October 2015 and obtained nice media support (Tsugi, Gonzaï…). In 2019, after 3 years of silence, the group announces its return. 7 years after the recording, Bruno Preynat resumed the mix of the album. The new sound is crazy, as much inspired by the disco punk scene (LCD Soundsystem ...) as the murky R&B of Billie Eilish.