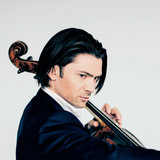 Gautier Capuçon is a true 21st century ambassador for the cello. Performing internationally with many of the world’s foremost conductors and instrumentalists, he is also founder and leader of the ‘Classe d’Excellence de Violoncelle’ at the Fondation Louis Vuitton in Paris. Recording exclusively for Erato (Warner Classics), Capuçon has won multiple awards and holds an extensive discography. His album of Schumann works was recorded live with Martha Argerich, Renaud Capuçon and the Chamber Orchestra of Europe/Bernard Haitink. In December 2019 Capuçon released an album with Yuja Wang, featuring sonatas by Chopin and Franck. Earlier recordings include concertos by Shostakovich (Mariinsky Orchestra/Valery Gergiev) and Saint-Saëns (Orchestre Philharmonique de Radio France/Lionel Bringuier); the complete Beethoven Sonatas with Frank Braley; Schubert’s String Quintet with the Ébène Quartet; and Intuition, an album of encores recorded with Paris Chamber Orchestra/Douglas Boyd and Jérôme Ducros. Capuçon has also been featured on DVD in live performances with the Berliner Philharmoniker/Gustavo Dudamel (Haydn Cello Concerto No.1) and with Lisa Batiashvili, Sächsische Staatskapelle Dresden and Christian Thielemann (Brahm’s Concerto for Violin and Cello). A household name in his native France, he also appears on screen and online in shows such as Prodiges, Now Hear This, and The Artist Academy, and from Autumn 2019 will be a guest presenter on Radio Classique.