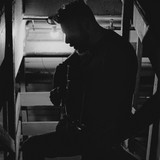 The hard work of being raised on a dairy farm has instilled a drive that cannot be slowed. After achieving a degree in Landscape Design and over 13 years of working in the field, Ben found himself exploring a different path. His love for country music and passion for singing while he grew up in rural Southern Vermont slowly began winning him over. After learning guitar in the hallways of his college dorm, he was finally persuaded in February of 2017 to perform live. That night ended up being standing room only. That was two years ago now & since then, Ben has been playing shows regularly in Vermont and New Hampshire, and has built up a large and loyal following. The crowds grew and so did Ben’s heart, and In September of 2018, Ben sold his home in Vermont, left his landscape career behind and moved to Nashville, TN. to pursue his dreams in country music. Within the first week he began playing writer’s rounds, including the famous Bluebird Café, open mic nights and found himself welcomed by Tootsies Orchid Lounge and several other Honky Tonk’s on Broadway. On the other side of the music lies a special place for the fight against addiction. Ben has lost some very close people in his life to the disease, and he’s joined up most recently with several counselors and facilities to speak out and use his music to help in the recovery and healing process. Once you hear the passion in his voice, and the spirit he brings everywhere he goes, believing in Ben Fuller will come easy.