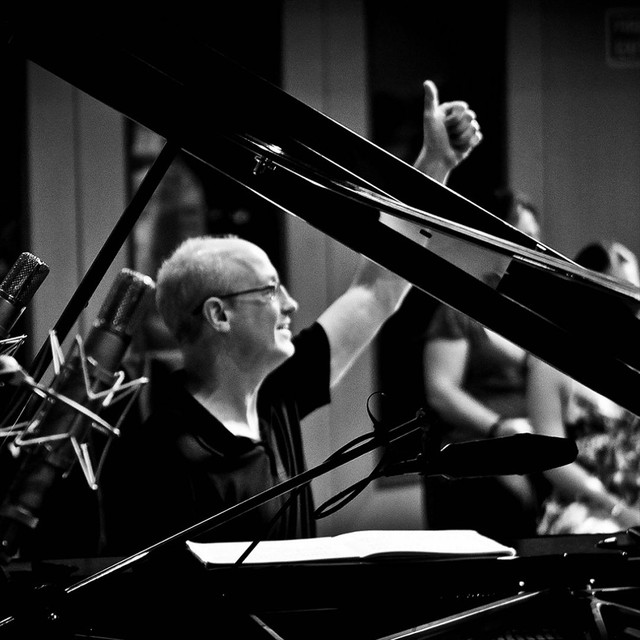 A lauded pianist, Shelly Berg is a gifted, classically trained performer and jazz soloist known for his own straight-ahead trio work and collaborations with a list of name performers. On his own, he has issued a handful of highly regarded jazz albums, including 1997's Will: A Tribute to Oscar Peterson and 2017's The Deep with bassist David Finck. As an in-demand arranger, Berg worked with such luminaries as Arturo Sandoval, Renée Fleming, Bobby McFerrin, and others. Highly regarded, he has earned five Grammy nominations, including for his contributions to Gloria Estefan's The Standards. Along with performing, he is also a respected educator, having taught at the University of Southern California Thornton School of Music and the Frost School of Music at the University of Miami, where he has served as dean since 2007. Born in Cleveland, Ohio in 1955, Berg grew up in a musical family the son of jazz trumpeter Julius "Jay" Berg. He began playing piano as a child, and at age six was accepted into the Cleveland Institute of Music, where he studied classical piano with Maxine Priest. He also began writing music, and at age nine composed a piece for children's choir and orchestra. Along with classical music, he developed a strong love of jazz, attending concerts and jam sessions with his father. In his teens, he moved with his family to Houston, Texas, where he continued to excel, studying with Lucien Lemieux and playing in his school ensembles. By age 15, he was playing professionally, working with such legends as Arnett Cobb and Clarence "Gatemouth" Brown. After high school, he honed his skills at the University of Houston, where earned his Bachelor of Music in Piano Performance in 1977 and Master of Music in Piano Performance in 1979. While there, he studied privately with Albert Hirsh and Abbey Simon, and served as both a lecturer and teaching assistant. He also continued to seek out professional work, playing with a variety of artists including a weeklong stint with the Woody Herman Orchestra. After graduating, he embarked on his teaching career, first as Chair of Instrumental Music at San Jacinto College North in Northshore, Texas from 1979 to 1981, then as Chair of Instrumental and Commercial Music at San Jacinto College in Pasadena, Texas from 1981 to 1991. During this period, he also found freelance work playing gigs as well as composing and arranging jobs for television, including composing the official theme for the 1986 U.S. Olympics. Moving to Los Angeles in 1991, Berg joined the faculty of the University of Southern California Thornton School of Music, where he served as both professor and Chair of Jazz Studies. He also continued to perform, working often with trombonist Bill Watrous. In addition, he established himself as an in-demand composer/arranger, contributing to TV shows like CBS' A League of Their Own (1993), ABC's Fudge (1995-1997), and the 1998 comedy film Almost Heroes. He also contributed to albums by Kiss, Chicago, and Elliott Smith. In 1995, he made his recorded debut as leader with the straight-ahead trio date The Joy. He followed up two years later with Will: A Tribute to Oscar Peterson, appearing with Peterson's longtime rhythm section of bassist Ray Brown and drummer Ed Thigpen. Also, from 1996 to 1998, he served as president of the International Association for Jazz Education (IAJE), and was named as one of three "Educators for the Millennium" by The Los Angeles Times. Along with teaching, Berg has authored a number of books, including Jazz Improvisation: The Goal-Note Method (Kendor), The Chop-Monster Jazz Improvisation series (Alfred), and The Essentials of Jazz Theory series (Alfred), among others. In 2005, he topped the jazz charts with the trio album Blackbird, with bassist Chuck Berghofer and drummer Gregg Field. That same year, he received the Dean's Award for Scholarship and Research, USC Thornton School of Music. Also around this time, he joined bassist John Fremgen and drummer Peter Erskine for Pieces of String, and followed with a pair of duo recordings, including Home with You with vocalist Carmen Bradford in 2004 and First Takes with guitarist Frank Potenza in 2005. He also issued All Things Are New with his Beaux J Poo Boo quartet, featuring guitarist Fred Hamilton, bassist Lou Fischer, and drummer Steve Houghton. As an arranger, he contributed to Ray Charles' 2006 album, Ray Sings, Basie Swings, and was music director and pianist on PBS' Great Performances television show We Love Ella! A Tribute to the First Lady of Song. In 2007, Berg left his 16-year position at Thornton to accept the role of Dean of the Phillip and Patricia Frost School of Music at the University of Miami. Along with his work as dean, he also holds the title of the Patricia L. Frost Professor of Music, in which capacity he teaches improvisation classes and private piano lessons. Since moving to Miami, he has worked with a bevy of luminaries including Arturo Sandoval, Renée Fleming, Bobby McFerrin, and more. He returned to his own work with the 2009 solo piano date The Nearness of You. Two years later, he picked up his first Grammy nomination for Best Instrumental Arrangement Accompanying Vocalists for his arrangement of "Out There" from Lorraine Feather's album Tales of the Unusual. In 2014, the pianist earned two more Grammy Award nominations as co-producer on Gloria Estefan's The Standards album. A year later, he garnered a fourth Grammy nomination, again for his work with Feather, for his arrangement of "Be My Muse" on her album Flirting with Disaster. In 2017, he paired with bassist David Finck for the duo album The Deep on Chesky. A year later, he joined José Serebrier and the Royal Philharmonic Orchestra for Gershwin Reimagined: An American in London. ~ Matt Collar, Rovi