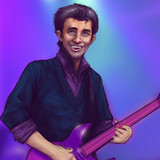 Some say it's best to be fashionably late. Vampire Step-Dad took that to heart and arrived about 25 years after the party ended. Listening to a Vampire Step-Dad release is like sneaking into a movie theater in 1986, and finding a John Hughes film that never made it to VHS. Spanning the emotional gamut, whether a candlelit love scene, a taut suspense thriller, or an action packed crime drama, Vampire Step-Dad's sound is rooted firmly in 1980's sensibilities. After a continuous stream of releases since mid 2015, Vampire Step-Dad is now focusing on bringing his music to the stage. He's recently opened for Carpenter Brut, Timecop1983, and TWRP. His stage show brings with it not only musical performances, but also a bit of step-fatherly advice, and plenty of dad-jokes that will leave you rolling your eyes while shaking your butt. Bloody Disgusting says Vampire Step-Dad "oozes nostalgia". When reviewing Vampire Step-Dad's Love Bites, Echosynthetic characterized it this way: "You can almost smell the pizza, old carpet, and hear the arcade games off to the side while the DJ calls out for couples-only slow skate." When not writing music, Vampire Step-Dad spends time missing garlic bread and struggling to write about himself in the third person.