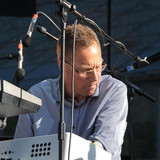 Jussi Halme is a producer, composer, pianist and keyboardist from Finland. He has released solo material since 1983, written songs for other artists and composed themes for nearly a hundred well-known tv programs in Finland, for example the cult series Hyvät Herrat. He is also an Finnish - Grammy award winning composer from 1985. When he was only 18 years old, Halme gained attention with his performance in Pori Jazz festival in 1979 with his group Zambas. In the 1980s he was one of the few Finnish producers who wrote and released jazz-funk, disco and boogie. Halme's private-pressing single from 1983, Funny Funk, is a much-wanted dj favourite worldwide. Recently Halme has been making music also with younger Finnish producers Misha and Monma. Their single Brazil (2018) has been a big chillhop playlist favourite. Halme's genres are funk, soul, latin, rnb, smooth jazz and beats. He is glad about the recent rediscovery of his 1980s productions and is planning to do more collaborations with younger music makers, because they are the future. Instagram: @halmejussi