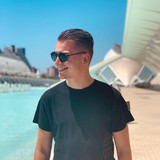 Wessel van Wijk, better known as "DSTRQT" is a DJ and Producer from Holland. Born on 1 October 1997 and currently counts as an extraordinary up-and-coming producer at the industry. The sounds of DSTRQT would be described as clubby, futuristic and groovy.

The brand DSTRQT came alive at the end of 2015, when he released his first unofficial remix of Infinity on the internet. The first big highlight came already one year later. Bojac and DSTRQT teamed up with their track "Formula", with a spot on Oliver Heldens’ imprint Heldeep Records. This track got many support from DJs like Martin Garrix, Oliver Heldens, Sander Van Doorn and Tchami. Tchami played this song almost at every live set.