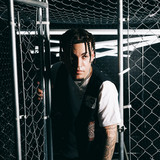 Prznt, is a 22 year old Hip-Hop artist from Cuba, who at the age of 6, moved to Florida to start a new life with his mother and younger sister. After the move Prznt rapidly absorbed American pop culture and became influenced by artists such as Kid Cudi, Lil Wayne, 50 Cent, and Drake. Growing up in a place where the majority of people settle and don’t chase their dreams, Prznt was fueled by a burning desire to pursue his passion of making music. As he always states, “great things take time”. Prznt had a lot to deal with from a young age, including his mother’s struggles from job to job, and is determined to make a name for himself to provide for his family. As the years passed he began how many creatives do crafting records from his bedroom with the hopes that one day they would receive the recognition he knew they deserved. Some of those records created in his bedroom include “Laudy Daudy" and "Alone", which have amassed millions of streams across multiple platforms. With the release of his recent EP Stay For The View, Prznt looks to bring the listener into his world to create a unique listening experience. What makes Prznt different from many of today's brightest stars is that, against all odds with no label or financial backing, he has been able to create a name for himself in the music world and has fans all over the globe.