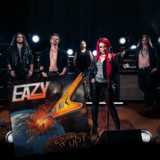 EAZY - Fresh Rock from Vienna! A new band from Vienna is mixing up the rock scene! What makes EAZY? Catchy guitar riffs, head-banging drums, playful yet solid bass lines, harmonic melodies mixed together with a cheeky, versatile voice. All inspired by the 80s and embedded in the present time-pure modern nostalgia. The first singles, JB & Coke, War People, Coming Home and Eleven show fans what to expect from EAZY, music that is in the foreground and is rounded off with lots of fun and a rocking attitude. On December 6, 2019, EAZY’s first live stream on Youtube was a great success and had enthusiastic fans from all over the world. This is the link for the entire stream -> https://bit.ly/38ca55n. Now the international fan community is eagerly longing for more. So much can be already revealed: the first album is more colorful, louder and more theatrical. The album "Crank it Up!" is OUT NOW! Look forward to a rocking year 2021 with EAZY and lots of flying curly hair!