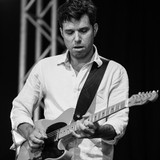 Using the oud and guitar as his vehicle, Stefanos imprints his experiences from Greece and London on his music, taking the audience on an authentic journey that uniquely fuses Mediterranean music with jazz. The collaboration with bass player Dave Jones and drummer Eric Ford allowed the project to creatively evolve to its final form. Currently, the trio presents its debut album “Native Speaker” as well as new material while performing in the UK and abroad, at venues and festivals including the EFG London Jazz Festival, Ealing Jazz Festival, Teignmouth Jazz Festival, the Bulls Head, Jazz Cafe POSK, the Vortex and the Green Note. The second album has been recorded and will be ready for release soon. “Not for a while have I been regaled with an admixture of musical styles and influences that worked so well in the interests of what we understand as jazz. It's not what the oud can do for jazz, as it were, but what jazz can do for the oud. Or vice versa.  ”  - Nigel Jarrett, Jazz Journal “I’ve enjoyed listening live to Stefanos on so many occasions so it’s great to hear this recording. I love his melodic, direct way of playing & the empathy of the trio here.”  - Phil Robson “One of the best [gigs] that I’ve seen at BMJ. Tsourelis is a brilliant player of both his chosen instruments and it was particularly enjoyable for me to see the oud being played at such close quarters.”  - Ian Mann, the Jazz Mann