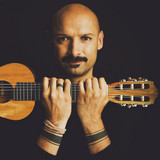 “By seamlessly mixing his passion for music and social phenomenon, Jurgis DID

proves that an artist can do much more than just entertain. He can inspire, he can transform, he can make a difference.” This Colombian-Lithuanian has thrived as a chameleon on the Lithuanian music scene for well over 15 years. Fearless experimentation earned him numerous awards and garnered many hits, but there was only so much he could do within the constraints of his industry. So a couple of years ago, inspired by examples of disruptive innovation, he decided to break the mould and began to use music and adjacent art-forms deliberately as a means for social impact. That desire to do more with his art redefined him and the scope of his activities. It has spawned a new form of exceptional, participatory musical experiences, that enlighten and engage as well as entertain.