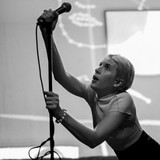 YACHT began as the solo project of Jona Bechtolt, a musician, artist, and high school dropout.   Jona began recording as YACHT in 2002, releasing Super Warren MMIV, MEGA, and I Believe In You. Your Magic Is Real.. During this time, Jona released albums with The Blow—including 2006’s breakout Paper Television—collaborated with Devendra Banhart, Little Wings, and The Microphones, was a prolific remixer, and created commissioned performances for Rhizome, The Kitchen, and MoMA.   YACHT became a duo with the addition of writer Claire L. Evans in 2009. Their critically-acclaimed See Mystery Lights was named “Best New Music” by Pitchfork and “Critic’s Choice” by the New York Times. The pair have since formed the nucleus of a nervy and experimental live band that expanded and contracted on tours with LCD Soundsystem, Hot Chip, Vampire Weekend, and Yeah Yeah Yeahs. Their 2011 album Shangri-La was followed by a string of singles and EPs, each showcasing a canny design sensibility. On the release of their 2014 EP Where Does This Disco?, WIRED called YACHT "music not as a thing in itself, but the beginning of a chain of experiences which has no edge.”   Their 2015 album I Thought The Future Would Be Cooler was released with a conceptual campaign nominated for two Webby Awards. In 2016, YACHT imploded. They returned in 2017 with Strawberry Moon, a pop polemic about online culture, animal rights, and failure. In 2018 Claire’s book, Broad Band, was published by Penguin Random House.