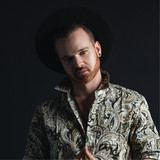 Chase Bell is a Singer, Songwriter, and Music Producer with his own blend of Acoustically driven flying vocal infused pop. Chase has been cultivating his style since 2010 and has lived in Europe and performed around the world. Chase’s prowess as an instrumentalist, singer, and writer led him to being a well kept secret in Hollywood where he has produced alongside the top of Pop music. Chase’s new songs are heartfelt and true and resonate with the inspired and hopeful mind. You can hear Chase’s music on Tv and film from Lucifer to Shameless and many films.