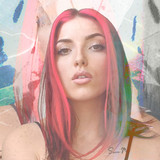 of 'Losing My Religion' with Steve Aoki and Gattuso, ‘Never Leave You’ co-produced with Lucas Estrada, a remake of MGMT’s ‘Kids’ with KSHMR, and ‘Let Me Go’ co-produced with Alok and KSHMR where she directed and produced the feature music video.