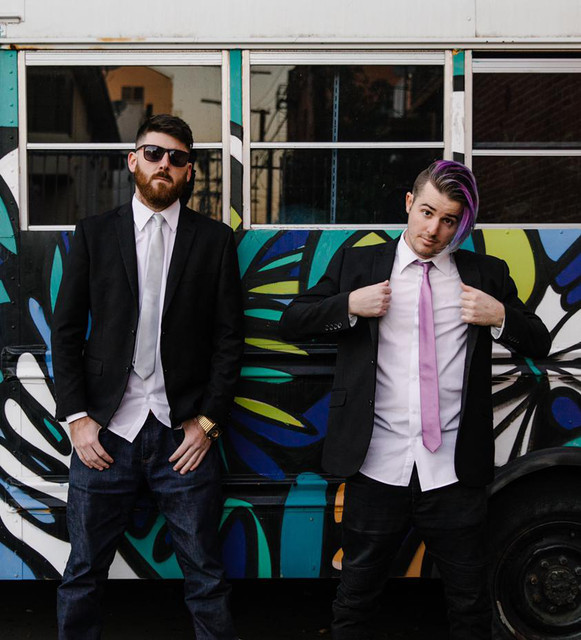 Welcome to the dynamic world of the Corporate Slackrs. Where suits and ties are paired with purple hair, and electronic sensibilities meet undeniably fresh pop flavors. From Jacksonville, FL, this unlikely duo met in 2013, somewhere between Corporate and Slackr: Devin was making beats to escape his 9-5, while AJ was making rounds as a DJ in the local college circuit. United by their vision, Devin & AJ released their first original, “Smash” with Landis, on Robbie Riviera’s label. The debut single was supported by Tiesto, Laidback Luke, and Gareth Emery, garnering over 2.7 million streams and counting. The duo soon embarked on their Slackrs Summer Tour, gaining a loyal fanbase across the US. By 2015, LA officially became their headquarters, and the next year, they released a remix of La La Land (DVBBS, Shaun Frank, & Delaney Jane) that was quickly picked up by Marshmello and millions of fans across the globe. In 2017, their original track “Electric Sky” (Insomniac Records) was named the official theme song for EDC Vegas, with Tiesto playing it in every set. They released “Wasted Love” on Tiesto’s label in 2018, and scored 2 major song placements in “Geostorm” starring Gerard Butler. Constantly creating and evolving, the Slackrs just released their first EP, “Highs & Lows,” filled to the brim with infectious pop melodies, heartfelt self-reflection, and squeaky clean production.