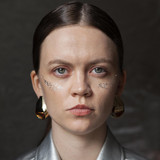 Behind the pseudonym ‘Maud’ stands artist, producer, songwriter and singer Kristine Hoff who grew up in Northern Norway, where the sun never shines or never sets. Maud joined Killing Moon’s roster June 2019 after being spotted at a showcase festival

by Director Achal Dhillon leading to the release of her debut single ‘Real’ which was released on Killing Moon Records in March 2020. Her debut single was also featured as part of Killing Moon’s latest compilation New Moons XIII. ‘Bad Things’ was released as the second teaser for her upcoming album which received coverage from the likes of Music Crowns, Chalkpit and Whatthefunk. The track also landed Maud the cover for Deezer’s ‘New Electronic’ playlist. Her second single ‘Baby Girl’ was the perfect partnering single, possessing the same dark underbelly but relishing in a more experimental soundscape, this introspective and atmospheric second track vastly broadens the scope of influences for Maud’s upcoming debut. On home turf, Maud has featured on various Norwegian festival line-ups such as Insomnia, Sørveiv, Trænafestivalen and Bodø Jazz Open. Maud also made her UK debut at London’s The Old Blue Last last March as part of New Moons Volume XIII showcase garnering her notable attention across some of the city’s critical industry folk. Since then, Maud has worked instinctively preparing her for the release of her debut album due 2021 despite a global feeling of uncertainty.