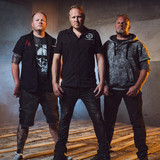 A progressive thrash and power metal unit based out of Lindesnes, Norway, Communic were formed in 2003 by vocalist/guitarist Oddleif Stensland, drummer Tor Atle Andersen, and bassist Erik Mortensen following the demise of Stensland and Andersen's previous band, Scariot. Quickly signed by Nuclear Blast Records, the trio recorded its debut album, Conspiracy in Mind, for release in mid-2005, followed by Waves of Visual Decay the following year. Next in line was Payment of Existence dropping in 2008 and The Bottom Deep arriving in 2011. Communic moved to German metal label AFM for the release of their fifth studio album in 2017's Where Echoes Gather. Now in 2020 the band releases their new album "Hiding From The World".