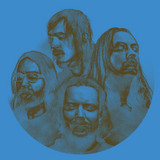 Howling along to the birth cry of the third millennium, Goat the Head

hatched from ideals of sincerity, intensity and insanity. The band burst onto the metal music scene in a flurry of fur-hair and filth with the crude “Neander Tales EP” (Left Horn Records, 2006), introducing the public to their own particular take on "Contemporary Primal Caveman Death Metal". On “Simian Supremacy“ (Tabu Recordings, 2007) popularity grew beyond Norwegian borders. The band had amassed some sort of sick cult following. The strange and cinematic music video for the sixteen second song “Darwinian Minions” didn’t exactly hinder that. Live appearances grew in quantity, energy and sheer outlandishness. After witnessing Goat the Head live in a London boxing ring, HIM’s Ville Valo compared the spectacle to “watching the Animal Planet with a chainsaw gaffa-taped to your head”. Follow up album “Doppegängers” (Aftermath Music, 2010) represented a great evolutionary leap for the heads. Smelly pelts were shrouded in fancy space threads, both visually and sonically. The album was mixed and mastered by Tue Madsen, giving it its loud, violent and mechanical quality. It also saw a more experimental side to the band, like on the death metal gospel crossover duet “This Tube is the Gospel” together with Kirsti Huke. The band