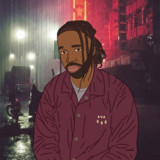 Not your average producer.  LoFi and Electronic artist Walter “AwaBeats” Isaac, grew up in Georgia and was later raised in Bay Area of California, after moving to the state in his teens with his family. Walter has always enjoyed listening to music. Taking after his parents, he grew up listening to Motown, 80’s funk, and Gospel. His time in Georgia introduced him to hip hop; this quickly became a favorite genre of his, as the making of beats had been particularly his area of interest. Upon coming to California, his friends would introduce him to Electronic Music. He’d also earn the nickname “Awa” during this time, all the while finding one of his favorite artist duos Daft Punk. They’d become an inspiration for him and he’d slowly find ways to make music just like them. Getting his hands on whatever free audio software he could find, he’d begin to make beats in his bedroom. This would have him wanting more and he’d soon find himself in front of a real soundboard. From middle school up till college he’d help or run audio for his family church, and in high school, he’d pick up DJing as a side hobby. He’d study Digital Audio at Santa Rosa Junior College and occasionally would DJ for the campus. His time studying at the JC would allow him to learn to use more professional Audio Editing Software and to become a better producer. He is now studying Broadcasting Electronics and Communication Arts at San Francisco State University.             Contact@awabeats.net AwaBeats.net