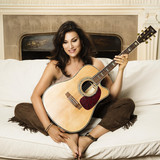 b. Canada. Despite a hugely successful decade in the music business, it was not until 1996 that Amy Sky released her debut album. Classically trained on the cello, she is the daughter of Canadian broadcaster and psychologist, Dr. Sandy Shiner. She began writing her first songs aged 13, and played in cover bands while studying for a degree in theory and composition at the University of Toronto’s Faculty of Music. Her first professional employment came as backing singer for Toronto-based rockabilly artist, Ronnie Hawkins. After six months with Hawkins, she moved to Nashville, Tennessee, where she judged writing and performing opportunities to be greater. She became a staff writer for MCA Music in 1985, working with Nashville-based songwriters including Wayland Holyfield and Mark Wright. After relocating to Los Angeles, she married fellow singer-songwriter Marc Jordan. Sky has subsequently become an internationally-renowned lyricist, enjoying her initial breakthrough by co-writing ‘Just A Little Love’ with Holyfield for Reba McEntire. Further commissions included writing for Diana Ross (‘Stranger In Paradise’), Belinda Carlisle

(‘Deep Deep Ocean’), Steve Wariner (‘When We’re Together’) and Heart (‘Cherry Blossom Road’, ‘Voodoo Doll’). She has also worked extensively with Jennifer Rush (‘Wings Of Desire’). However, the release of her own material was delayed twice, but problems with first MCA then Capitol Records jinxed sessions. Her debut album, Cool Rain, finally emerged in 1996. It included several collaborations with her current songwriting partner, Bruce Gaitsch, as well as several other musicians. The follow-up, Burnt By The Sun, earned Sky a second Juno nomination for Songwriter Of The Year. In addition to her recording career, Sky has appeared in the Toronto-production of Blood Brothers alongside David Cassidy.