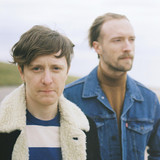 Picture this: two people meet in small town northern Ontario on a Saturday night as summer is coming to end. A chance encounter that eventually will define the narrative of the rest of their lives. That is both the story that runs through the debut record Small Town Saturday by Summersets, and also how the new duo’s members, Kalle Mattson and Andrew Sowka, met growing up in Sault Ste. Marie, Ontario. The Juno & Polaris Prize nominated Mattson began writing Small Town Saturday to play out like a series of vignettes, each one exploring a different moment in time between two characters, from the first time they meet until one passes away. “I was really interested in telling the story of a relationship across a collection of songs. Changing perspectives & spanning milestones, both big and small, over the course of a lifetime” says Mattson. The end result is a sunny and often upbeat record that is highlighted by Sowka’s melodic harmonies & taking inspiration from the warm lush sound of late-60s early-70s singer-songwriters. Small Town Saturday acts as the first chapter in a three-part album, just the beginning of the story for these two characters, and for Summersets.