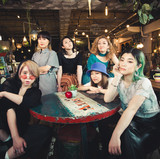 ORESKABAND is... all-female ska band formed in 2003 when they are at a junior high school in Sakai City, Osaka Prefecture. Their original sound, which was influenced by Jamaica's popular music SKA and REGGAE, combined with a powerful message coming from real women living today, and energetic live performances, has been loved enthusiastically by whoever they've touched!! They have been performing actively in Japan and overseas, such as tours in 46 cities in the United States, performances in Brazil, and tours in Europe.