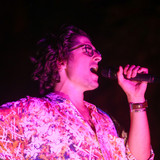 Robert Alfieri is Canadian singer, songwriter and charismatic performer from the Niagara Region who has been playing and composing songs since he was 8 years old. His authenticity, quiet confidence and witty sense of humour are portrayed in his original music. Catchy, optimistic and well written, Robert’s song lyrics focus on themes such as love, loss, growing up and a variety of life experiences, as his crooner-style ballads are perfectly matched with his easy demeanor. Robert is influenced by a variety of music genres, but his preferences are pop, R&B, and contemporary. Notable past performances include opening for Virginia to Vegas in 2018, Ryland James, 2020 and International Music Artist, and Juno Award Winner Dominic Mancuso in Hamilton in 2019. Pre Covid-19, and again in 2021 Robert can be found performing at many establishments, and festival stages in the Niagara Region. For several years Robert has performed for Youth Day Global Festival held in Toronto at Dundas Square, and was asked to be a host for the 2021 Festival held in July and again was requested to host and perform at the Youth Day Gala held in Toronto this past September 2021. His original song ‘Can We Just Dance’ won the InterContinental 2020 Music Award for the North American Pop R&B category, as well Robert was nominated as Best New Artist in the 2020 Niagara Music Awards. With his newest song "Wanderer" set to release on November 4th, We're excited to see what's next for Robert Alfieri.