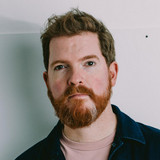 Smith was born in Essex and raised on the Devon seaside. Known for his intimate songwriting, his honey-on-gravel voice, and pioneering guitar playing, he has spent the last fifteen years touring internationally and has amassed over 50 million streams on Spotify. As a session musician, he has played guitar with artists as diverse as Joan Baez, David Gray, Joe Henry, Lianne La Havas, and Tom Jones.