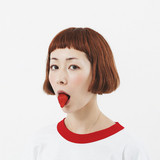 Born Rie Kaela Kimura on October 24, 1984, Kaela Kimura was initially a model for magazines such as Seventeen Japan before becoming a pop singer. Her next gig after modeling, that of host to a morning television show, Saku Saku, utilized her pop skills, as her debut single, "Level 42" was used as music for the closing credits in 2004. That same year, Kimura released her first album, Kaela, which led to a follow-up full-length, Circle, featuring the single "Rirura Riruha," a song that was used in a Vodaphone ad. In February of 2007 Kimura released her third album, Scratch, which reached number one on the charts. ~ Chris True, Rovi