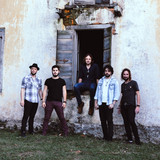 South Brazilian rock band, Elixir Inc, has been making waves in music since they formed in 2002. Originally from Bento Goncalves - Rio Grande do Sul, this Rock group has achieved much in their time together. Soon after their inception, they released their first Lp “Get Out”,

which was recorded in São Paulo with producers Brendan Duffey and Adriano Daga. The group caught the attention of Sony Music; earning them a spot on their catalogue!   Their next album, “Midnight Sun" was released in 2013 and put them on the roster for the Rock in Rio! Music Festival. The following year, Elixir Inc was invited back to perform the opening acts for Mr. Big and Whitesnake Tours in Brazil.   The debut record “Get Out", with the song called “Burning for me", took seventh place for several weeks as next and upcoming artist in channel 96.1 KKTX radio in East Texas. Since then, the band has performed at many well-known Brazilian venues.   The band is now on tour releasing their third album, “On the razzle", and also recording a new EP to be launched in march of 2020 followed by a euro summer tour.